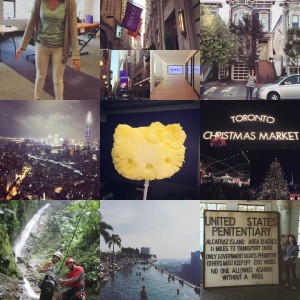 There was a lot of trips.

And it went by kinda quickly.

I got to do a fair amount of traveling, mostly for work.

In April 2015, I visited San Francisco for a work event and got to visit Silicon Valley where my company has their headquarters. I also made it out to visit Alcatraz Island and the Full House house! In September 2015, I went to New York City –again for work– but I got to see the Ed Sullivan Theater all changed from the old David Letterman signage to the new Late Show with Stephen Colbert signage. (I love Stephen Colbert!) I also managed to get tickets to the show, twice, once for the first month of being on air, but didn’t end up going. :\

It was kind of a bummer of a NYC trip, on the personal non-work related level, in that I didn’t manage to get any rush tickets for any broadway shows when I usually luck out in that department. Failed miserably to get into Fun Home (which had great buzz), Wicked, and Aladdin. In November 2015, I was chosen at work to go on a Global Exchange to the APAC region so I got to work out of the Taipei and Singapore office for a week each. With the Singapore team More pictures and posts on my Tumblr.

And in late November 2015 (with only a week in-between trips), I went to Costa Rica.

Professionally, it was a tumultuous year. It was my first full year in that role but there were many, many changes. Three plus-ish quarters of almost drowning in workload due to these changes. But overall, work culture has improved and it’s starting to feel a bit more like my old job where I really felt part of close-knit work environment.

I got to volunteer in October for the Big City Improv Festival. Got to see some amazing improv troupes do their craft and also made me realize I need to get back into improv.

Family and friends were good. Some friends I’ve somewhat lost touch with. I got to help out with one of my friend’s proposal to his girlfriend which involved a lot of pugs. I met new buddies on my G Adventures trip and on my work exchange trip. My dog is still healthy and much more behaved now, well at least where it comes to the secret pooping.

I discovered more of a passion for fitness this year, after I realized that going to just mainly Bodyflow classes actually made me gain weight. So I got back into cardio classes like Bodycombat and weight-training classes like Bodypump, throwing in Bodyflow here and there.

I also discovered I really enjoy video-making. On my Costa Rica trip, I was filming a lot more of my activities and I think moving forward, I will try to do that more on fun activities and improve on my video-editing skills.

I got back into biking and biked to a lot more places (while still being scared about getting hit by a car). Rode my bike to High Park a few times, Bloor/Spadina and around my hood. Still haven’t gotten the nerve to ride to work yet.

I rarely keep up with my resolutions when it’s stuff like “go to the gym 3x a week” but I’ll just throw out a goal for this year.

A retrospect of 2016
Costa Rica Quest (with G Adventures) – PURA ...
How to make the right career choices for yourself
Dancing on my own… in a new place
Share this!