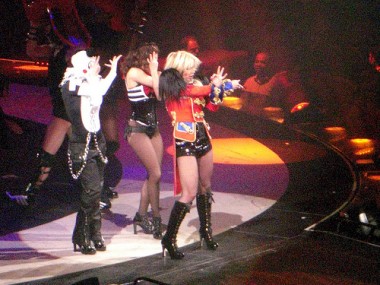 As for Britney herself, she pranced around, didn’t fall over, there were no costume malfunctions to speak of, and no accidental inappropriate comments said while still mic’d up so I’d call it a good performance. It was mostly songs from Circus, but also quite a few from In The Zone and Blackout — with a throwback to her first hit “Baby One More Time” toward the end. It was entirely lip-synced, obviously, but that was basically to be expected. As has always been the case with Britney, she’s more well-known for her dancing during live performances than her singing. However, the dancing was somewhat lacklustre. There were moments where you got a glimpse of the early 2000 Britney (a la the early VMA performances and definitely not the disastrous 2007 VMA performance), such as a dance break during “Toxic”, but there seemed to be a good deal of walking back and forth between the three rings and some shuffling back and forth in certain parts. One part, I caught her doing some penguin shuffle inspired type dance move.

She only interacted with the audience twice: once to introduce “Everytime” and say “Hello Toronto!” (which abruptly ended with an awkward “great… well this next song…”) and at the end when she said goodbye to the crowd. That was it. In parts, it seemed very likely that she hasn’t completely recovered from her breakdown in 2007 and 2008 (who can forget Hostage Brituation ’08 and the shaving the hair incident?). As much as I love her, and kind of think of her as my kid in the school play who isn’t very good but being the proud parent I am, I’ll cheer loudly for them anyway, she appeared dead inside. I’ve seen her in concert before and in TV performances back in the day and this just didn’t seem like the same Britney who once revelled in being on stage performing for a crowd. After all she has been through lately, with her seemingly doing much better under her father’s conservatorship, I am not entirely sure she was ready for a big tour quite yet.

But Britney does “go through life like a Karate Kid” so maybe getting back on tour will just make her stronger and help get her back to form. Back to the Britney we knew and loved (not that we don’t love her now… c’mon, how can you not love her after the Karate Kid comment??!).

Some of my photos from the night

Costa Rica Quest (with G Adventures) – PURA ...
A retrospect of 2015
It actually happened: I met the Oprah!
“There are far, far better things ahead than...
Share this!