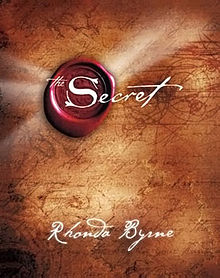 So, first, what is The Secret?

I shall quote for you the summary from the book version of The Secret:

For some time now, I’ve been curious about this much touted Law of Attraction, which is really what The Secret is all about but without the marketable “zing factor” to it. I first heard about it from an Oprah episode where she was raving on about how great this was, how it was revolutionary and so on. I’m all about The Oprah and everything, but I had my reservations about all this hoopla over what appeared to be nothing more than a brilliant marketing ploy. I was just never really convinced about just how useful all this was and if there was even any direct correlation between one’s positive thoughts about attaining so and so goals and the actual act of attaining said goals. The most ridiculous assumption of all was the idea that The Secret can and will work in every aspect of your life: not just your career goals and personal relationships, but also can be used for “wealth enhancement”, weight loss and even as a cure for severe illness (see Wikipedia article for all other criticisms). You can’t help but be sceptical about something like this.

However, now that I am actually reading the book, while I am not ready to completely believe in all of this, I am willing to give it a shot. Reason being, there may be some truth, if not in the visualizing/thinking positive thoughts = positive things manifesting in your life, but in the opposite effect. Not too long ago, I was constantly bombarded with negative thoughts and as the Secret folks would say, these negative thoughts attracted negative things. And it did. If there is even an ounce of legitimacy to all this Law of Attraction hoopla, then I have nothing to lose (and maybe something to gain). I realize, perhaps unlike some followers of principle, that it is not the be-all, solve-all solution to making my life everything I could ever hope for it to be. What this principle sorely lacks is the importance of volition and the virtue of hard work and perseverance. But assuming I throw in positive thinking to the mix, I am willing to try out the principle behind The Secret/Law of Attraction for three months and I’ll use this blog to document the experiment.

So alrighty then. From this day forward, I’m going to take a few moments in my day to affirm positive things about myself, think about positive things I want to happen/manifest in reality, and while I’m at it, think non-stop about ridiculous amounts of wealth. Take that Bill Gates, you have nothing on me. I HAVE POSITIVE THOUGHTS!!