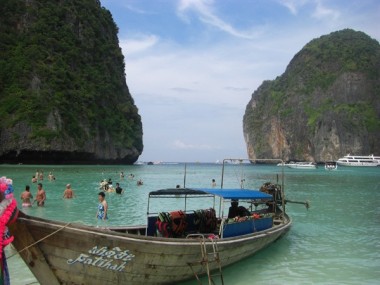 Continued from Part I

December 17th was our last day in Phuket. Last day of seeing ladyboys everywhere (though apparently I am oblivious to them and had to have them pointed out to me), seeing scantily-clad women dancing on poles outside, being bombarded by people trying to get me to a PING PONG SHOW or asking if I wanted a tuk tuk. We were going to a more low-key place, Koh Phi Phi island!

We boarded a ferry to Koh Phi Phi island, an hour and half from Phuket. An hour and a half of sea sickness fun! By the time we got there, the sky was dark and cloudy and it looked like it was going to pour. And it did, as we were walking across the island to our hotel. 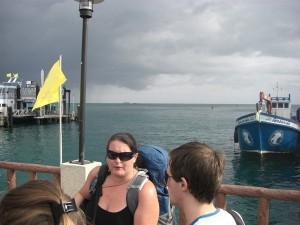 Our hotel, the Bayview Resort, was on the far end of the island and on a hill beside the beach. Did I mention that the island has no cars, motorbikes or tuk tuks and only way of getting around is by bike or foot? 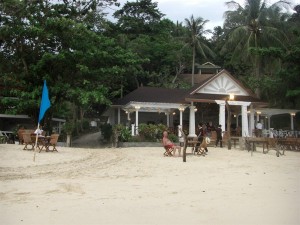 I’m terribly out of shape so huffing it to my 4th level (the highest on the hill) room was enough exercise to last me a lifetime (when we left the room, we had to make sure we HAD EVERYTHING because there was NO TURNING BACK!) but I could still appreciate the magnificent views from my room. 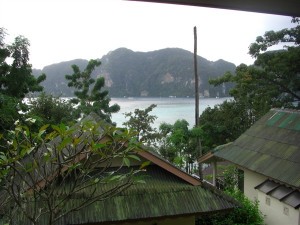 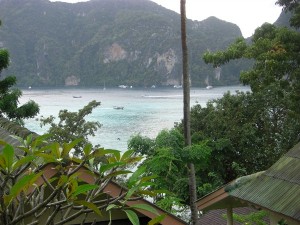 There was an interesting door that opened up from the bathroom, right beside my bed. Also, note, the sewage system on the island isn’t as robust so toilet paper can’t be flushed down the toilet — the toilet paper had to be put in a trash bin beside the toilet. If you do a #2, gotta use the hose as well. 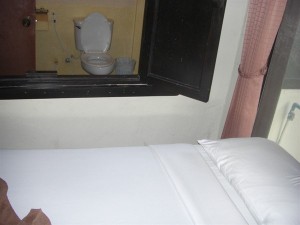 How the streets look like on Phi Phi island. 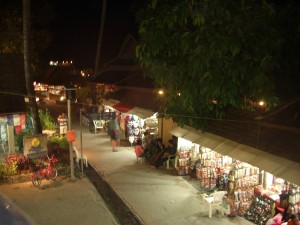 That night, we went to Banana Bar, which had really awesome treehouse type roof decks. I felt like I was in something between Fred Penner’s Place and the treehouse in Sir Arthur Conan Doyle’s The Lost World. Except with booze and such. However, when you’re carrying alcohol, it proves difficult to climb up ladders so maybe not the most practical.

Then we went to Slinky Beach Bar — a club, as you might’ve guessed, on the beach. Tons of people and since it was right on the beach, you could just people-watch as they did scandalous things not too far from the shore (and oftentimes, right on the shore). 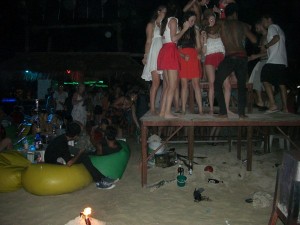 There was a pole in the middle of the place and people kept climbing it. I thought that someone was bound to fall off of it. 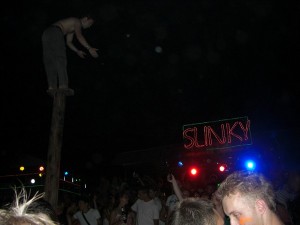 I’m on a boat
I’m on a boat
Take a good hard look at the motherf**kin’ boat
– The Lonely Island, I’m On a Boat 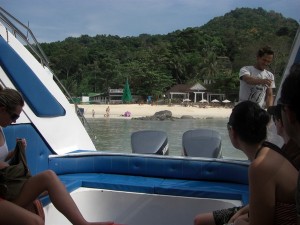 Alas, though, boats and me = not good. But Dramamine is fantastic!

We went snorkeling with pretty fish and then went to Maya bay, where they filmed The Beach. IT IS BEAUTIFUL! Jam-packed with tourists though but absolutely beautiful. 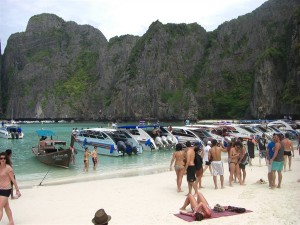 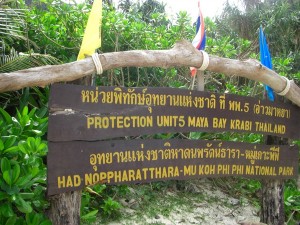 Back to the boat and off we went to Bamboo Island for lunch. It was less crowded. 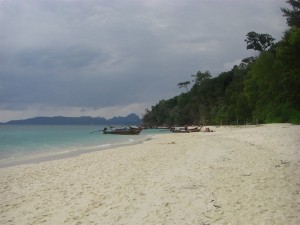 I found a dead jelly fish on the beach. 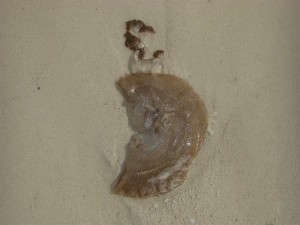 Last but not least on the itinerary was a stop at Monkey Island (which we saw earlier but had just driven by… sailed by?). There were tons of monkeys! 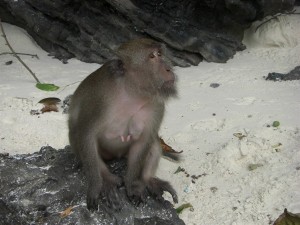 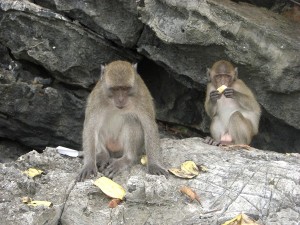 They were cute, but I also made sure to not get too close because I didn’t want to be the victim of a monkey mauling (I heard a monkey mauling did happen to someone while on my trip so it was a legit concern).

Here’s a video of the monkeys.

And for my/your amusement, a sign found by my hotel. 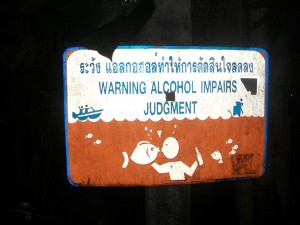