HomeMusingsI be up in the gym just working on my fitness! 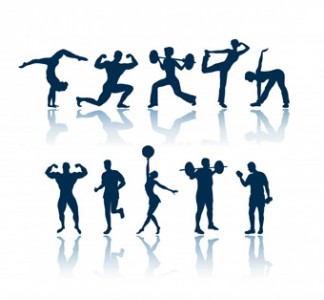 Apologies for quoting a lyric from Fergalicious.

For the past year or so, I have had lofty fitness goals. In these lofty fitness goals, I liked to imagine myself as a fitness guru who was awesome at everything. Could I be a yogini (female equivalent of a yogi)? HELL YA! Could I zumba like nobody’s business? You betcha! Could I go to spinning class and not want to collapse and die at the end of it? For sure!

Sadly, none of this is really true but I still have these lofty fitness goals and in 2012, I am determined to keep at it.

Here is a list of all the things I’ve tried, with varying results:

It was the most horrific, difficult experience of my life [hyperbole]. I was sweating buckets and my legs were turning to jelly. I appreciate the instructor who kept coming round to my bike to offer me helpful hints like “keep your back straight” and “go with the flow”, but I was pretty sure I was one more pedal away from having a heart attack.

At the end of the class, I could barely stand straight and the next day, I was unable to even get out of the bed or sit down. And this was supposed to be the BEGINNERS CLASS! I later learned that beginners class means nothing in terms of difficulty and that we are just free to exit the class early if unable to continue on. But you feel judged when you leave early, so I stuck around to the end, as I huffed and puffed and sweated an inhumane amount of bodily fluids (TMI?).

Would I do it again? A BIG RESOUNDING NO!! NEVER, EVER AGAIN! In fact, I told my friends if I even entertain the idea of giving it a second shot, I pre-emptively give permission for someone to slap me.

Also took a beginners class. Also thought I would be AH-MAZING at it because it looked pretty easy. And also, NEVER AGAIN! I thought it would be really fun because I used to like sliding down the pole on the playground and this is KINDA like sliding down a pole? Somewhat, maybe? So many problems with this attempt.

Where do I begin. First, I think with my body DNA, I am just not meant to pole dance. Pole dancing requires not just a lot of upper body strength – of which I have none – but also a certain body chemistry, that is, dry hands to allow one to grasp the pole securely. Sweaty hands = slippery hands and slippery hands mean possible pole dancing related injuries!

A good portion of the class was spent wiping down the pole with a spray and paper towels while the rest of the class attempted different tricks (is that the word? Tricks? Eh, just consulted with Wikipedia and yeah, tricks it is!). I got a lot of words of encouragement from the instructor and even had some help from fellow classmates, who were likely pitying me and my lack of ability to even spin around the pole. Even with a squirt of some stuff that is supposed to dry up your hands and make it powdery to grip the pole, I still kept sweating through my hands and sliding off it. Sometimes causing pole-burn on the insides of my wrists, while doing so.

So basically, I spent the entire class wiping down my pole and standing beside my pole. Still, at the end of the class, the instructor said me and my equally pole-dancing-failure friend did an EXCELLENT job for first-timers! Yes, acknowledgement of my try! (Only child syndrome?)

Would I do it again? NO!! Unless I suddenly manage to get rid of the sweat glands in my hands…. and buff up my upper body strength (possibly with the use of protein shakes).

I am a big fan of Sweating to the Oldies a la Richard Simmons type cardio fitness. I can do that kind of exercise till the cows come home. I am just THAT GOOD at it. I also used to watch a decent amount of So You Think You Can Dance and America’s Best Dance Crew and always was amazed by the hip hop dance numbers. I thought, that looks like fun and I’d like to do something like that. So I went to a hip hop fitness class for fun and maybe, extra bonus, pick up some awesome new dance moves. However, as I should’ve guessed from attempts at playing Dance Dance Revolution, I have very, very poor hand/body eye coordination and I cannot follow dance steps for the life of me.

I tried my best to follow along to the moves and I just kept losing count, never really sure where to step to and basically looking like a turned over beetle trying to flip itself over (best analogy I could think of, sorry). I looked pathetic.

Would I do it again? Yes, I would. Albeit feeling and looking like an idiot, it was fun.

So here’s some background: I am a bit addicted to those Groupon type sites and whenever I see what looks like a decent deal on something fitness related, I buy it. I’ve bought 3 short-term gym memberships from it, in fact. One year ago, I saw a deal for a 20 class pass for a yoga studio that was a ways away from where I live and work but I figured, I would definitely make the trek down there at least 20 times. Boy, was I wrong. During the cold months, January – March, I said “it’s too cold! I will go during spring”. When spring came along, I thought “I might as well wait until the summer when I get summer hours and go down to class early”. When summer came round, my new excuse was “I have better things to do to enjoy the beautiful weather than sweat in a yoga class”. Meanwhile, I had every intention to actually start yoga – I bought myself a cute yoga mat and a nice top from Lululemon. I was all ready to go! I just never actually did go, per se. Right around end of November, right before my trip to New York City and a few weeks Thailand, I realized that this 20 class pass deal expired January 10th, 2012. I decided YES I WILL START GOING TO THE CLASS AFTER I GET BACK FROM NEW YORK CITY! But then I came back and was too busy getting everything together before my big trip.

Gist of the story is that of the 20 class pass, I ended up only attending one of those 20 classes and it was a class called Beginners Joga (basically yoga with more of a focus on strength).

For most of the class, I was able to keep up with everyone else — except sometimes, see above sweaty palms issue, during downward dog, my hands kept sliding out from underneath me. And the whole lacking upper body strength part made holding poses really difficult so I never stayed up as long as the more experienced people in the class. But my favourite was definitely “child’s pose”. I could stay in that forever!

Another thing I enjoyed about the class was the ending relaxation portion. The lights were all turned off, some ambient light from Christmas lights stringed up around the room, some aromatherapy scents sprayed into the air, and us all lying on our mats, thinking of positive thoughts and pushing out the negative thoughts. It was a nice, relaxing exercise. I almost wanted to fall asleep.

Would I do it again? Yes! I’m already on deck to go to more yoga classes this week. I even bought myself a new top from Lululemon just for this occasion 🙂 (also, I like to shop)

Soon to come in this “I need to get in shape” series: Zumba, Bollywood and more kinds of yoga classes!

I’m planning to sign up for a full year gym membership in the weeks to come so I can track this progress. So yay! Hopefully, I don’t accidentally DJ Tanner myself at the gym (you know the infamous episode I’m talking about).