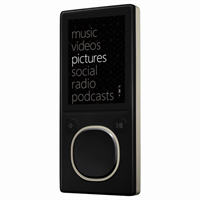 My initial thoughts on the Zune thus far

The interface – The interface is a far cry from the rather bland iPod interface, even with the new implementation of cover flow and the way the iPod Classics have split screens so there isn’t as much white space. My current iPod, the 5th generation iPod video, is just all white space. It’s just not very exciting to look at or scroll through, to say the least. The Zune’s main interface has large type and a customizable background, which is a neat feature. You just have to add the photo you want as a background to your photos section and check the option to use it as your background. The prominent use of album art also makes the Now Playing screen a lot more eye-catching and appealing to look at. With the iPod’s use of album art, while an improvement with the new iPod Classic, still doesn’t really take full advantage of space. As you can see with the photos below, it is just white space that takes up the screen.

On the left, the 5th generation iPod video (what I have) and on the right, the iPod Classic. Compare that with the Zune’s Now Playing screen.

Lack of a clock and games (for now) – Whenever I am listening to my iPod, I have the clock displayed on the Now Playing screen, so when I need to check the time, it’s right there. I usually don’t even wear a watch so the clock feature is very important to me. With the Zune’s lack of a clock, I just find it very inconvenient. It may be a very small, negligible feature for some, but for many users who are used to iPods and the clock feature, it is a huge negative.

As well, as of now, there are no games on the Zune but according to sources, games will eventually be added to the device. I never really play the games on the iPod, unless I am really bored and killing time, so the lack of games on the Zune isn’t really a deal breaker for me. However, it is always a nice extra feature to have on a portable music player.

The Zune software – The thing about the Zune is that the player just doesn’t work until you download the software and then plug it into your computer for the first time. Even the radio and settings don’t function, it just requires you to install the software first. That can be a tad annoying when you just get the thing and just really eager to play around with it.

As for the software itself, I find iTunes much more user-friendly. For me, I keep most of my music on my external harddrive (mainly because I don’t have much storage space on this laptop) so I like to use manual syncing. On iTunes, I simply have to drag and drop my files to iPod section, listed under my devices. On the Zune software, this doesn’t appear to be feasible. I have to drag my music to my Collection (which is equivalent to My Library in iTunes) and then sync it with my Zune. If I have to change ID3 tags on any of the songs on my Zune, I have to go change it on the file in question in my Collection and then sync it with my Zune whereas with iTunes, I can just edit tags on the iPod itself. If the song you’re changing tags for is not in the same location as when you first added it to your Collection, or you’ve deleted it since then, syncing won’t really work because Zune will say that the file cannot be found.

Managing podcasts is also not as easy with the Zune software. With iTunes, the convenience of the iTunes store allows one to easily search for and subscribe to podcasts. Not so with the Zune software, you actually have to get the URL to the RSS.xml feed for the podcast, which isn’t hard to find for those who are somewhat web savvy but I can imagine that this would be a difficult task for the novice user.

However, on the plus side, the software will automatically search and add album art to all your tracks — provided that the track information brings up results on Amazon or what have you. If you have a rare EP, for example, you’ll have to add the album art manually.

The touchpad – On the Zune, you scroll by either clicking in a direction on the touchpad or you can activate the Touch feature, which basically means you can just flick your finger across the pad to navigate. Comparing it to the iPod’s circular touchpad, the Zune’s touchpad requires more “finger flicking” and is more difficult to use. On the Zune, you have to lift your finger a few times when you scroll down a long list. If you are specifically looking for a particular song or artist, you either have to do numerous scrolls with your thumb to slowly go down the list or do a few, quick scrolls but you will likely scroll past what you were looking for so will have to go back up. Using the iPod’s circular touchpad, I find the accuracy for finding exactly what you’re looking for much better and as well, requires less effort to get to it.

Strangeness with syncing – And here’s one odd thing I’ve noticed with syncing. I have a song, “Untouched” by The Veronicas that I wanted to add to my Zune. So I added it to my Collection and it shows up in there perfectly fine. I then synced it with my Zune and while the song itself does show up on the list of songs, The Veronicas doesn’t show up in the Artists list nor does the album it is under, Hook Me Up, show up under the Albums list. I always browse my music by Artist so this has been rather annoying. I can go to my song list on my Zune and then find “Untouched”, play it and it will show all the correct artist and album information, so it just seems peculiar that browsing through Artist and Album, it’s just not there. I’ve synced it numerous times, checked the tag information, made sure all the ID3 tags are filled in, but yet I cannot for the life of me understand why this is. At least with iTunes, if something doesn’t show up when browsing by Artists, it’s likely due to ID3 tag problems (i.e. having some entered as Death Cab for Cutie and some as Death Cab For Cutie) and it simply is not the case here.