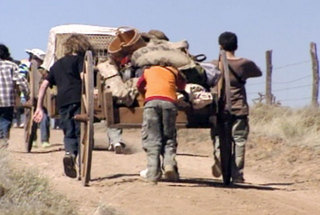 Child labour has never been this entertaining!

Controversy has been swirling around CBS’ Kid Nation for as long as the concept was first brought to the media’s attention. Its premise being a reality show about 40 kids living on their own and running a town (Bonanza City) for 40 days. AND WITH NO ADULTS! Exploitative? Probably. Entertaining? Absolutely! If not just good old entertainment for the masses, at least it’s an interesting social experiment.

Upon hearing about Kid Nation, my interest was immediately piqued and so I eagerly awaited the season premiere, which was this Wednesday, September the 19th. Did it meet or exceed my expectations? Sure it did. I don’t know whether it’s going to be one of those reality shows I watch out of genuine interest (i.e. Little People, Big World) or watch for the sheer ridiculousness of it all (i.e. Flavor of Love, Littlest Groom and even America’s Next Top Model with the increasingly over-the-top Tyra antics).

On the up-side, to my surprise, I am actually quite impressed by these kids. I had expected mostly whiny, annoying, spoiled kids throwing tantrums or being menaces (and there are some, you can’t gather 40 kids without having at least having one). Some of them displayed maturity beyond their years and their will to persevere, even when things were bleak, was admirable. They were actually able to organize themselves to accomplish things, like cooking for the first time. The awarding of the gold star was also a nice touch. A gold star, an award given out by the “town council” every week to the kid who demonstrates leadership skills and makes a positive contribution to the town, is worth $20,000. Besides the cash, it’s a good lesson to teach the kids: that hard work pays off and you should strive to rise above the pack. In this first episode, the winner of the gold star, Sophia, didn’t actually know about the existence of the prize and still tried her best to lead the group in the right direction. Overall, it offers a valuable learning experience even if it is rather unconventional and its methods, somewhat questionable. Learning to cooperate and collaborate is imperative in this kind of predicament, and it’s a good skill to instill.

As I said, this is definitely an interesting social experiment. Kids, taken out of their natural element, are able to subsist and function in their own governed social system — free of adults, or almost free of adults (considering the host and the crew). I just wonder if it will get to the point of chaos a la Lord of the Flies. Let’s not forget that a child’s brain is not fully developed and as such, they are not able to engage in logical reasoning, control impulses, and understand the reactions of others as well as adults. That difference in biology could result in some dramatic situations (read: huge ratings). Imagine the kind of stuff that gets people boiling mad to the point of insanity on shows like The Real World, Survivor, Big Brother, America’s Next Top Model, and etc, and those are, supposedly, rational adults!

I still highly doubt that the show is completely “adult free” in that there will not be any adult interference whatsoever. I don’t know what goes on behind scenes, but I don’t think that the show would completely disregard the children’s basic welfare. If it ever did get to a lawless, Lord of the Flies type situation, I am almost certain that someone will step in and intervene. The parents may have given the show free reign with their kids, so it says on the site, but I think they’d probably want their kids back in one piece. So as to avoid lawsuits, there has to be some kind of help, particularly in drastic circumstances.

I’ll keep on watching. And if Kid Nation 2 does happen, and it looks like it will because there’s already an application on the website, I will probably watch that too. Heck, if I had a kid, I’d sign him or her up. Bring mommy home 20 grand! To be honest, as I think about how I was at that age, I am not sure I could say that I too would be able to do what some of them were able to when placed in such a situation. I’d probably be like Jimmy, the kid who was sobbing and wanting to go home soon after arriving (and later, did indeed go home). This show isn’t really even as exploitative and controversial as it was first made out to be, besides it being based around the members of society we see as most vulnerable and innocent. I’m sure shows like MTV’s Fat Camp [documentary special], Shaq’s Big Challenge and the like, are much more exploitative. But I guess since those shows target obese kids in the name of (or the disguise of) helping them or promoting healthy eating habits, then that’s okay.