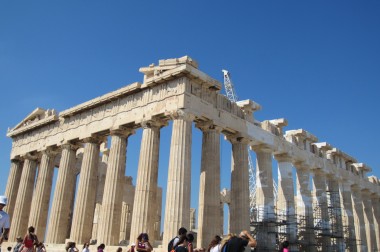 Continuation from Part 1 – Italy, next up on the Mediterranean Trail is Greece, more specifically, Corfu and Athens (the Greek islands are in part 3).

While in Italy I learned some phrases (my favourite being ‘scusi’) that to this day, still remember. But the only Greek phrase I remember from this trip? Pretty much just OPA! And I intend to start using it more often in everyday conversation now that I am back home (similar to how I will throw in ‘scusi’ whenever it feels appropriate). So opa!! Let’s go!

The beginning of my obsession of frappes and gyros. We were on a BOAT (take a good hard look at the motherf**king boat! Sorry, I can never be on a boat ever again without singing That Song from The Lonely Island) and we partied it up in a toga. I saw dolphins, I swam, I tanned.

On a ferry with “airline type seats”

“Airline type seats” – legit, that is what the ticket said on it. They were comfy and I had empty seats around me to sprawl out… but it smelled like puke. Literally, not figuratively.

A random musing from the ferry ride

So I’m on a Greek based ferry and I don’t know if most of these passengers are Greek or Italian but my nose keeps getting assaulted by some hardcore stinky B.O. smells. It is enough for me to almost gag, and I have almost 10 hours of this. I was sitting happily –or as happily as I can be with the puke smells– in my seats (I have three to myself) and then some random man comes and sits behind me where Laura, our tour manager, was sitting and had just gotten up leaving the seats vacant. Then all of a sudden, I smell this putrid smell – only to realize the random who had walked into our area was sitting behind me and stinking up the place.

Jolly Hotel in Igoumenitsa (not actually in Corfu)

After the ferry ride, we ended up in a small little port town to spend the night.

We stayed at the Jolly Hotel, though the lights on “TEL” were (still) out so it was the Jolly Ho.

The Jolly Ho was not that jolly of an experience… nope.

We stayed at the Corfu Village (a Contiki run place). It had an outdoor pool and the beach was steps from outside.

First, we went into town to shop and eat lunch. There, we went to MicMac and I had my first gyros while in Greece. It was SO GOOD and cheap at €2.50.

Did some shopping, bought some gifts for people (I’m soooooo selfless, other than the bracelet and the frappe I bought for myself =p I know, so not me).

We returned to the hotel and lounged around at the pool. I slathered on sunscreen and pretty much sat in a donut inflatable the rest of the afternoon until dinner.

I can’t go back to a life of gyros without fries on them.

Another 3 course dinner with a lot of wine and food. There was also live entertainment. Four entertainers came and did some traditional Greek dancing for us and then, eventually, audience participation dancing! We OPA’d it up in there and danced around in circles, in lines, all over the place.

And towards the end, I had to just sit there, scratching my legs because I had 100 mosquito bites. It was particularly aggravating when we had to hold hands with people and dance around and all I’m thinking is I HAVE TO SCRATCH!

So I gave up on dancing and just scratched. Which resulted in awesome, huge red welts on my legs.

George’s Boat! A highlight of the trip

Went to different swim spots where we got to jump off the boat and go swimming. Awesome day.

We saw some dolphins swim alongside our boat and I got some video of them.

We also got time to do some water sports. I rode a banana boat and didn’t get flung off, yay me! I wanted to do para-sailing but it was pricey and I was a bit worried of a “wardrobe malfunction” up in the air.

Ate tons of George’s delicious tzatziki and fresh veggies on the boat. George called us up by country to sing the national anthem and a song representing our country (Canada’s song was Summer of 69. I preferred the other countries’ songs, like Australia’s Land Down Under, US’s Surfing USA –though could’ve been equally as good with Party in the USA— and South Africa’s Africa).

I’m tanned like crazy after today but I have a sunglasses tan on my face unfortunately.

Fun times with an old bed sheet. Three Contiki groups were there including the group who were there with us on George’s boat. But the room we did it in was a literally sweat pit – I think I lost 10 lbs just being in there. It wasn’t pretty, being a hot mess 🙁

Alas, I bounced just after midnight even though I intended just to go back to my room to get more money for drinks but on my trip back (it’s like rooms on a hill, outside), where I saw tons of creepy crawly things and geckos, I decided to just stay up in my room. Too scurred to go back out.

Taking a ferry from Corfu to get to Athens

Left at 7 am but ferry didn’t really leave until maybe 8:30.

I guess that’s “Greek-ish” time for you.

Gypsy children in cages on a truck!

We saw all these people, mainly children and assumption is that they are gypsies, in these crate things on our drive towards Athens.

It was a very WTF moment, as I looked around and no one else was acknowledging that we were standing by FREAKIN’ TRUCKS WITH CHILDREN IN CAGES.

And I took the below photos from the bus window because I surely would have been stabbed to death had I taken them in person, in front of them.

Check out the cages of people/children

Athens was definitely something. It’s chopped full of history –it is, after all, the birthplace of democracy– and as a former philosophy major (who only stayed in it for first year before switching to sociology but nonetheless), the idea of Athens excites me.

But once you get there, with all the graffiti and the overwhelming feeling of sketchiness that surrounds you (partly due to the graffiti, though some of it was rather artistic, and the fear-mongering for pick-pocketing thieves), it was somewhat less exciting than I anticipated.

Other than an almost gypsy attack, everyone was really nice and helpful in my state of almost constant lostness.

Dinner at a little restaurant nearby Monastiraki square

AHH! Attacked by gypsies
Jun 27, 2012On the streets, while just trying to get a frappe! Three guys siddled up beside me and speaking in Greek and I was like “AHH I’M GONNA DIE AND/OR GET ROBBED!”.
(Addendum: After watching this documentary, Gypsy Child Thieves, I’m so thankful I escaped unscathed and with all my possessions. Thank god at that very moment, I saw someone from my group walking towards me.)

Took some group photos of everyone on our tour since this was the last day together on the tour.

Sad to no longer be on Laura’s tour. She was awesome.

Did a nice farewell by all dancing to our day song, Michel Telo’s Ai Se Eu Te Pego at a bar and the guy working there filmed it for us on my camera (but really dark, rather cruddy, video).

Our last day sheet on the tour 🙁 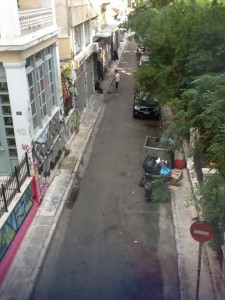 The view from our hotel room. FANTASTIC!

Nearby Monastiraki square and down some sketchy looking streets.

But on the bright side, it looked really nice on the inside. Plus, there was free wifi – wifi that I could actually use FROM INSIDE MY ROOM! Praise Jesus! After all the hotels we were in where the wifi didn’t work or required me having to go down to the lobby to use it, this was very appreciated.