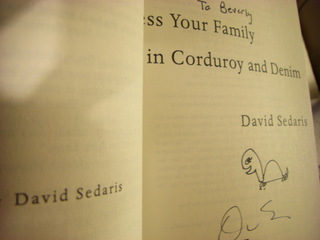 Well, what’s better to do on a Friday night than line up for hours outside a bookstore to meet your favourite author? And that is exactly what I, the big ol’ nerd that I am, did to meet David Sedaris.

I thought there would be a reading as well, and a David Sedaris reading is something not to be missed if you’ve ever listened to his audiobooks, but it turned out to just be a book signing. No matter, I thought, it was just exciting to finally meet someone whose work I admire so much and who inspires me to be a writer too. I had heard from a David Sedaris group on Facebook that meeting him, you should expect quirkiness and a conversation that can be out of left-field. It’s nothing like the autograph signings I’ve been to, which were by and large for musicians and such, where a typical conversation runs something like this:

Me: I am such a huge fan of yours! (Maybe insert some remark about something specific about their work that I like so much)
Them: Thanks so much!
*signs whatever it is I’ve just handed to them*
Me: Thanks for signing this. It was great meeting you.
Them: You’re welcome. Thanks for coming.

And that’s basically it. That isn’t the case when you meet David Sedaris, no sireee.

David takes the time to talk to everyone who comes up to get their book(s) signed and while this makes the line move as slow as molasses, if not slower, it’s nice to see he appreciates his fans for taking the time to line up to meet him and tries to make them feel special. Another quirky thing he does is draw or write a personalized message or doodle on the book which, I suppose, also takes a bit of time. Lastly, he will randomly give out little trinkets or hotel toiletries to people. Sadly, I did not get anything but a girl ahead of me got some shea butter lotion (I believe it was) and another girl got a bracelet.

Here’s how my meeting went:

It was about 11pm by the time I got to the front of the line (I had been there since 7:45ish) and he was just given a meal of Fettuccine Alfredo and garlic bread. As I stepped up, he was munching away on the pasta and I felt like I was interrupting the man’s meal. He gestured me to come up anyway so I did. First thing I said, which I had practised while waiting in that line up, was that I was really happy to meet him because I am a huge fan of his books. He said, “That’s because you’re a Libra“. At this point, I was giddy inside over hearing him speak to me because I have listened to his audiobooks over a million times and he has a very distinctive voice, so to be in the presence of “that voice” is a bit staggering. Anyway, back to the story, I said that I’m actually a Capricorn. He said he was one too and I am like, “Oh cool! Apparently they say Capricorns are serious and boring”. He asked me where I heard this and I said those horoscope books. Then he asked me if I was boring. Had I been one of those people who thinks on their feet, I would have said, “Well it’s a Friday night and I just spent a few hours lining up outside a bookstore to meet my favourite author. I don’t know. I’ll go with ‘no’, I’m super exciting!”. But well, l’esprit d’escalier as they say, and I just said that I don’t think even boring people would admit it, or something to that extent. Yeah, I fail at life.

At this time, he grabs his garlic bread and starts eating it and I say that I feel like I’m interrupting his meal. He tells me that it’s okay and in a lowered voice, says that what he’s eating doesn’t actually taste very good. I’m like, “Oh really?”. He says that he wanted pad thai, not this, and he’ll probably get some later. He then tells me that the Fettuccine Alfredo “tastes like white”. I’m like, “White? Really? What does ‘white’ taste like?”. I don’t think he really elaborated on that but my assumption is “white” just tastes like crap.

Then I prepared to make my “witty comment” which I had spent the last few days thinking up so that there wouldn’t be uncomfortable silence or worse, I’ll accidentally start rambling on about how much I love his sister Amy and her work with Stephen Colbert (whom I obsessively adore). Or perhaps start asking about his boyfriend Hugh or his family in general. It’s just the consequence of reading someone’s memoirs, you end up feeling like you know everyone they write about and you almost end up being some sort of creepy, nosey person in the way you want to know about how so and so is doing. Except, you don’t actually know these people and asking about them is kind of inappropriate. So thus, I prepared my comments just in case there was some unexpected “word vomit”.

I told him, “I really enjoyed The Smoking Section in When You are Engulfed in Flames. I’m just glad that someone else was just as amused by the toilets in Japan as I was. When I got back from my trip, I told everyone about those electric toilets and they all looked at me like I was crazy.” (See my posts on my trip to Tokyo to see what I am referring to) I don’t think that liner really went anywhere though, but he did ask me if I spoke Japanese, to which I replied that I didn’t so that’s why when I went into stores and they all greeted me in a chorus of welcomes, I could just muster up a “Uhh yes, thank you”. It was kind of awkward, I said. He said that he really loved Japan and he’s going back this year, to Tokyo specifically. Then he asked me if I stayed in an apartment when I was there, and I said no. We started talking about how in apartments in Tokyo, they have this tub that goes up to your neck in water and it fills up and then you reuse the water the next time (and again and again, I think), and each time you have to heat it up, which it does gradually. At this point, I wanted to either mention that this reminds me of those step-in-tubs or ask if he partook in one of those Japanese hot springs (onsen) while there (which you have to experience naked, which then would reference his book Naked wherein he went to a nudist colony – hilarious stuff). Unfortunately, I couldn’t get the words out of my mouth for some reason or another, so that was basically it.

He signed my books, one with a “happy turtle” and I was on my way.

My signed copy of When You Are Engulfed in Flames
(I will soon be reviewing this, when I have some time)

My signed copy of Dress Your Family in Corduroy and Denim

Just for reference, at the two book signings he had in Toronto, no photography was allowed. Judging from the lack of photos of fans with him, it’s my understanding that he just doesn’t allow for photos to be taken with him or of him. So hence, the lack of photos from the event.

Update: I came across some Amy and David stuff in magazines so below are some scans of said articles.