HomeMusingsMore thoughts from an improv novice 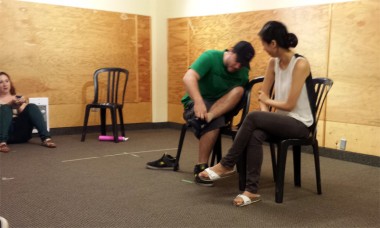 Since my last entry, I’ve been about a month and a half into classes. So far, I have to say that this has been a surreal, fun and fantastic self-growth experience. While in early classes I used to dread being chosen to join in the scene, groaning and panicking in fear of doing something stupid in front of the class, I’ve now decided on embracing being stupid and ridiculous in front of the class. Improv is about making mistakes and doing dumb things, so as my teacher says, so who cares – if it gets a laugh, great. If not, move on.

I also really get what Tina Fey refers to as improv as kind of a cult. Ever since I started taking classes, my mindset has become “I LOVE IMPROV!! I MUST SHOW THE WORLD MY LOVE OF IMPROV” and people who don’t get it, I don’t really get them. There’s something about being surrounded by people who have the same mindset, who appreciate comedy as much as I do that they will use their time and money to immerse themselves in this world.

Some thoughts on improv classes:

I’m in a glass case of emotion!

Few of the classes focused on emotions. When you really think about it, there are a huge amount of emotions on the spectrum besides the typical happy, sad, angry, surprised, excited, etc. The difference between “bitchy” and “annoyed” is just some small nuances. One of the games we played was an emotion orchestra where half the class stood up and the other half gave each person an emotion and a word. My word was pineapple and my emotion was bitchy. Based on our teacher’s hand cues, we would say the word with escalating or deescalating emotion. Now, I would think I could do bitchy pretty well but in reality, it was really difficult. Highly escalated bitchiness blends into rage so I ended up doing ragey bitchiness as I screamed out “pineapple!”.

We also had an “emotion party”, my favourite game, where there was an environment painted and starting with the host having one emotion, one by one we would enter the scene with a different emotion that all those at the party would adopt as well – without knowing what emotion they would do so you’d have to listen and watch carefully to adopt that emotion. Then in the same order starting with the last, each person would make up an excuse to leave the party and then the group would adopt the emotion that everyone adopted before the last person entered. I came into the “pool party” and stated in a monotone voice that it was very difficult for me being at a pool right now because my cat died… in a pool, in fact. My emotion was…. depressed emo/sad cat lady! (Oddly, crazy cat lady became my go-to character)

Work with your environment

Another class was about how your environment is like another person in the scene. It has its own characteristics that you can work off of and when you’re stuck, you can go off to engage in the environment.

One game we played was when we started with a premise, i.e. haunted house, and each of us played an object in that place. Then someone came in, for example in our case, a realtor and a buyer, to engage with us as the “objects”. I was a huge cobweb and KitchenAid mixer (separate times, obviously).

“In improv there are no mistakes, only beautiful, happy accidents” – Tina Fey, Bossypants

I know I said in my previous post to stop overthinking and just go with it. But alas, this is easier said than done.

We were asked to do fairy tales in one minute. I was a disastuhhhh! We went into groups of four people and then without any time to think or talk it out, we were given a fairy tale to act out in one minute on the spot. We got The Princess and the Pea, which I wasn’t really familiar with prior but if you’re like me and unfamiliar with it, it is about a princess who couldn’t sleep because there was a pea in her mattress. Or something. Since we had three girls and one guy, while the premise of the fairy tale was being described, the guy automatically lay down on the ground to be the princess. Haha, this is going to be funny, I thought. In my head, I came up with the idea of coming in as Christine Magee from Sleep Country Canada and talk about how you need a Serta mattress, perhaps singing the jingle while I was at it. It was going to be HILARIOUS!!!!! The other two girls went into the scene as servants and I stood on the side, anticipating my grand entrance with the hilarity.

But then the guy playing the princess answered, to the girl who asked if “the princess” slept alright, that she/he slept fine.

She asked again, “are you sure, princess?”

He again said, in a high pitched voice, “yes I slept really well!”.

My brain exploded and here I was, standing on the side ready to go in with my lines and suddenly, I had nothing. Since we had one minute, I just went in as another servant and mumbled something about the mattress being too firm. And because the guy speaking in a high pitched voice was so distracting to my inner dialogue, I started talking in a high pitched voice too, completely forgetting that I already was female so there was no need to. Blergh.

I just wanted to die. I wish I could re-do that moment in my life.

One of the more complex games we played that lasted for about half a class was to create a character. We first did the “honey walk” where we would walk around in a circle doing things like having one part of your body lead you, walking as an animal, with a different posture, acting how you think a character would act if they had that body part leading, posture or a particular animal, etc. Then we lay down on the ground with the lights out and either picked a person we knew well or that we did from the honey walk. I had recently been on a Netflix binge and watched a documentary about people on LA’s skidrow and this elderly lady with a huge humpback (which was my different posture pose) who walked around with a shopping cart with all her belongings, feeding all the stray cats in the area, really got seared into my brain. So I chose to be her, or at least a bastardized version of her. We were then asked to pretend to be in a speed-dating event as the chosen character, as we went around the class talking to all sorts of strange characters. I don’t know this lady’s life, other than what I knew of her from the documentary, but I imagined her being on the streets now because her asshole ex-husband left her for a floozy over thirty years ago. My character’s name was Henrietta Finklestein. She had a hard knocks life and was blaming the government, and ex-husband of course, for her hardships.

When you have some time to think over a character’s development, it really does make it easier to play them because you have context and the back story for how they’d react in certain situations.

I really, really enjoyed my first attempt at improv. It makes me really appreciate things like Whose Line is it Anyway a lot more. If you are near a Second City training center, I highly recommend you to take a class!

Things learned from improv class (and Tina FeyR...
Share this!