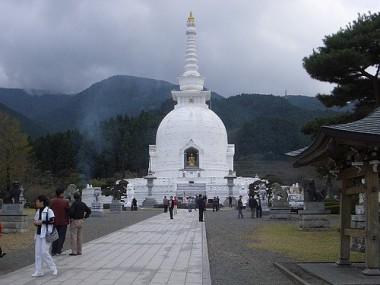 In October of 2006, I had the opportunity to visit Japan, a country I had wanted to visit for awhile now. So, as part of my post-graduation travels, I booked a trip to Tokyo to experience the unique Japanese culture meshed with urban life. I also got to visit such popular tourist spots as Mount Fuji (Fujisan), the Ginza district, Takeshita-dori street in the Harajuku area, Tokyo Dome City, etc. Picture heavy post below!

We boarded a flight on Japan Airlines (JAL) for Tokyo. Huzzah! The airplane we were on had these nifty personal LCD screens on the back of every chair, which was quite a thrill for me considering both the Air Canada and US Airways flights I took did not have such a feature (though I do know that the newer Air Canada fleets for long haul flights do have these personal entertainment systems). There were various movies to watch, games to play, music to listen to or you could just watch a map to see how far you’ve traveled and what exactly you were flying over. Arriving at Narita International Airport, we were greeted with a bustling crowd of travelers and scarce English text on signs. It was a surefire realization that we were in a whole different part of the world. We went to Palette Town. It’s an outdoor shopping centre and entertainment complex. The shopping area is called Venus Fort and amongst its many stores was one called Pet City. Needless to say, I went and bought my pet budgie a few “souvenirs” in the form of toys. Mega Web is another part of Palette Town. Mega Web is a Toyota showroom, where you can view and touch Toyota’s newest models and car accessories, test drive a real car (“Ride One”) or ride an automatic, electric vehicle (“E-com Ride”). There was also a ride that was a simulation of a car race, which was fun and reminiscent of Wonderland’s Days of Thunder ride, back in the day. There, at Mega Web, I got to first experience a typical toilet in Tokyo. The toilet had all these buttons on the side. One for a bidet feature, one to make flushing sounds (I assume this is for people who cannot “go” in quiet. See video below for a demonstration), and some other features. Well, as person who had never seen a toilet like this back in Canada, I was amazed and giddy… probably a bit too much so considering it was just a toilet. Overlooking the Rainbow Bridge from Odaiba at nighttime. At a mall nearby, I saw an umbrella drying machine. I kind of wished I had a wet umbrella to try it out with. I had heard about how Tokyo hotel rooms are typically tiny, tiny, TINY! But the hotel we stayed at was pretty spacious. This hotel was near Hello Kitty Land. Yes, a “land” dedicated to Hello Kitty. They sure love their Hello Kitty over there. YAY! It’s another one of those toilets I’m so fascinated with (apparently, I’m quite easily amused). I was watching some television in the hotel room (not sure why though, because everything was in Japanese) when I flipped by something familiar…

You remember late 90s British pop sensation S Club 7? Sure you do (who can forget those cheesy shows they had playing non-stop on MuchMusic?). I was just flipping through the channels and came across an episode of S Club 7 in Miami. I had to tune in for nostalgic reasons… then I realized they were using the show to teach English. (The audio seems out of sync when uploaded to YouTube for some reason)

At an amusement park called Fuji-Q High Land, near Fuji Mountain. Since I didn’t opt for the pass, with the alternative being buying tickets for each ride, I had to figure out how to buy the tickets. The machines were located near or in the vicinity of the rides but sometimes, they were hard to find. Why? Because each machine corresponded with a few different rides (4 or more) and the buttons to press to pick the ride you want a ticket for was in Japanese. Not being able to read Japanese, I resorted to identifying symbols that looked like the one on the ride’s sign, hoping to get a ticket for the right ride. A ride ticket ranged in price, with the more kiddy rides at 300 yen (about $3 CAD) and going upwards to, I think, 750 yen (about $7.50 CAD). (This ride below, which looks kind of like an easy-peasy ride for those who aren’t big on scary rides –like me– is actually a lot scarier than it looks). And Thomas Land, dedicated to none other than everyone’s favourite Tank Engine and all his friends. Apparently, with this bell, you’re supposed to make a wish or hope for good luck and then ram the log into it to have your wish come true. The water of these fountains is used for purification. You are supposed to clean your hands and mouth with the water. There were these vending machines, much like the pop and snack machines we’re used, except these machines had cold drinks and hot drinks. One of those drinks was this cream of corn drink that comes hot! It was kind of neat.