HomeReviews music No Doubt in Concert in Toronto – June 16, 2009 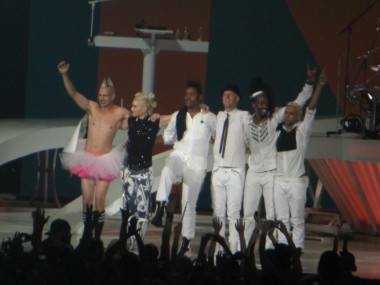 Whether or not you were a No Doubt fan in the 90s, if you go to one of their concerts, you are guaranteed to be off your seat and having a good time – they put on an amazing show. If you were, in fact, a long-time fan, then seeing them at a stop on their reunion tour will be all the sweeter with the nostalgic factor. The set list consisted of a good mix of songs from their chart-topping (and one of my favourite albums of all time) Tragic Kingdom, as well as the “newer” albums Return of Saturn and Rock Steady, including one song, “Stand and Deliver”, from their yet-to-be-released new album set for 2010. As with reunion tours, and this was the case for the Spice Girls as well, the familiar first few beats or chords of every song is enough to get you riled up and excitedly screaming, “OMG I LOVE THIS SONG!!!”. One of the most memorable moments of the night came in the form of the first few chords of “Don’t Speak” and the entire arena getting their lights/cellphones and me with my glowstick I found at work, up and waving to the rhythm as we sang along to those familiar words. It was like a serene, collective moment we all shared together and as cheesy as that sounds, it was enthralling.

The band played in front of the backdrop of an enormous screen that showed quirky videos and visually befitting imagery, complementing the songs being played. In one part of the show, old home movies from the band were flashed on the screen, showing us just how far the band has come from the days of playing small venues to huge arenas all over the world.

Another awesome thing about the show? Gwen Stefani. So she’s turning 40 this year but from watching her, you wouldn’t even know it. Let me just say, the girl is fierce. Besides having a body that is just ridiculously fit considering the fact she’s had two children, including Zuma who was born just last year, she is one of those lively performers who can captivate an audience with her energy alone. Not only did she suddenly start doing push ups at the beginning of “I’m Just a Girl”, she was basically running from one end of the stage to the other and dancing around during the entire set. While singing live. Maybe it’s just my subconscious comparison to my recent Britney concert experience, but I was mighty impressed the entire time. She also took the time to interact with the lucky fans by the front of the stage, including bringing up two fans onto the stage (one of which even got them to play a bit of “Let’s Get Back” with the fan holding up a poster with the lyrics, albeit incorrect lyrics) and at the end, signing a poster for someone. Too bad I was nowhere near the front.

All in all, it was definitely an amazing show and not just because it made me feel warm and fuzzy with nostalgia. It truly was a great performance by the entire band and one memorable night.

Playlist of my videos from the show

Pictures from the show

Including a few of Paramore.

Dancing on my own… in a new place
The following songs are ‘my jams’ (fai...
Salt-n-Pepa is still awesome!
Review and Pictures: Samantha Bee’s I Know I...
Share this!