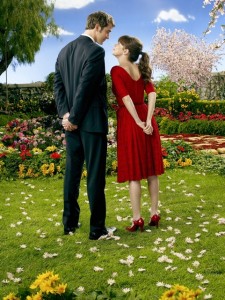 Pegged as a “forensic fairy tale” and acclaimed by critics, Pushing Daisies is easily the best new television show of fall 2007. It’s not very often I become instantly enamored with a new show, particularly with the way network execs love to toy with new shows and cancel them at the drop of a hat, thus devastating those who were starting to become invested in said shows. This show, though, I think has real potential (worthy to note: I am writing this a few minutes after its first broadcast on ABC so the ratings have not yet come in).

The premise of Pushing Daisies is based on the idea that a guy can bring dead people back to life with a mere touch of a finger. With another touch, the person is dead again… this time, forever. One minute or less between touches, no repercussions. Any more than one minute and another person’s life, based on random proximity, is taken instead. Pretty simple and straight forward, right? Not really. The background story is that the guy, Ned, used to have a huge crush on his neighbour, a girl named Charlotte but whom he referred to as “Chuck”. In an attempt to bring his own mother back from the dead, he ended up taking the life of Chuck’s dad. Only later did he realize the part about the second touch bringing on permanent “deadness”, and so his mother ended up dead yet again after a goodnight kiss. Their lives took a drastic turn after their respective tragic events.

The beginning shots of Ned and Chuck as kids were very aesthetically different from what you would usually see on television. It can be best described as a technocoloured dreamscape. There’s use of claymation and bright blue skies, it just had a very distinctive look. It really set the tone for the rest of the show because it gave it a feeling of a fairy tale, albeit one involving dead bodies. And pies.

Ned grew up to become a pie maker, making his pies in his own pie diner called “The Pie Hole”. He lives with his dog Digby, who happens to be the first dead being he brought back to life as a child and thus is now no longer able to touch. All is well until his secret ability is discovered by Emerson, a private investigator who happens to witness Ned in the act accidentally. They decide to become a team and solve the mysteries of “who dun-nit” by asking the deceased who killed them within the one minute alloted and then collecting the reward money.

One news story about a female was murdered on a cruise ship catches Ned’s eye. Turns out the dead chick on the cruise was Chuck, his childhood neighbour and childhood crush, whom he had his first kiss with. He and Emerson go to find Chuck in order to find out who killed her. After she’s brought back to life, she tells Ned that she doesn’t know who killed her and after some reacquainting, she asks him for a kiss so that he would be her first and last kiss. She suddenly stops herself and asks, “Or if that’s weird?”. He replies with, “That’s not weird. It’s magical”. *swoon* Their faces hover, their lips all puckered up, and he just cannot plant that kiss on her, as that would mean she would be forever dead. A minute passes and the owner of the funeral home dies. There begins a perfectly magical relationship between two meant-to-be soul mates who forever more cannot lay even a finger on the other. Can you say angst?

I cannot say enough good things about this show. The smart storytelling, the witty banter, the quirkiness, the overall cinematography, the casting, it was just perfect. The narration, by Jim Dale who you may know from the U.S. Harry Potter audio books, adds another dimension to the overall “fairy tale” feel to the show. But it’s not just a fairy tale-esque kind of show, it also brillantly blends comedy, mystery, and romance into one great package. The show operates on a level that assumes the audience is not composed of ignoramuses, but rather, people who can read into the nuances within the show. It’s also interesting to see a TV couple who is not even slightly physical with each other, as is the case with most TV couples and those who offer only some physical contact but not the whole shebang, the audience (or “shippers” for that couple, rather) will raise their fists to demand more (for example, with Grissom and Sara on CSI). In Buffyverse, even Angel and Buffy, who were not able to have sex as that would result in Angel losing his soul (again), were able to touch and kiss. I am really looking forward to seeing how this relationship between Ned and Chuck progresses and evolves throughout the show. If the writers continue to come up with charming and imaginative scenes or moments like the “touchless hand holding” we got at the end of the first episode, I am sure it will keep audiences watching and the hearts of fangirls pitter-pattering.

It’s not really anything we’ve seen before and can say, “oh it’s another reincarnation of so-and-so” and in that sense, it might be a challenge to attract an audience. If everyone gave it a shot, I’m sure they would find something to love about it. If you missed it, you can stream it online at ABC’s website if in the U.S. or on CTV Broadband if in Canada.