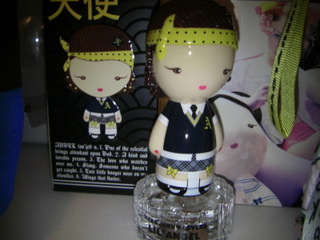 Gwen Stefani has released a new perfume line under her Harajuku Lovers brand and unlike the perfume released under her other popular line, L.A.M.B., this one has a cute and quirky flare that you’d expect a Harajuku Lovers product to have.

How is it different than other fragrances? Well, first of all, there’s the unconventional packaging. Each scent, five of them in all, has its own individual figurine atop the bottle. Actually, the hollowed out figurine itself makes up pretty much 90% of its volume and the glass bottle containing the perfume acts as a stand (so while the boxes for both sizes of Harajuku Lovers Fragrance seems large, that’s just indicative of the figurine size). This fact, that it comes in a set of five but can also be bought individually, makes them seem like collectibles a la the days when you were a kid and collected those McDonald’s Happy Meal toys in series. That is the main allure for the perfume line, it’s kind of campy yet endearingly so. And I’m sure a complete set of all the Harajuku Lovers fragrances would probably be a nice decoration for your dresser. And as any Gwen Stefani fan can easily deduce, the five figurines a.k.a. scents come in the form of her four “Harajuku Girls” (or as some ironically muse, Gwen’s “accessories”) plus Gwen. The five include G (The Leader Of The Pack), Love (Sweet Stuff), Lil’ Angel (Sassy, Sexy, Cool), Music (Tough Cookie), and Baby (Girlie and Sweet). Their respective scents also coincide with the names, or at least if you stretch your imagination a little bit.

Matchstick Marketing sent me a bunch of sample vials to give out to friends, a 10ml bottle of “Lil’ Angel”, as well as some neat extras like a bracelet, a drawstring bag and a make up case. It was like Christmas! A very scenty Christmas.

So far, Lil’ Angel, Love and Music are my favourite scents. The other two, initial sprays were not quite as pleasant as the other three (i.e. Baby smelled a bit too powder-y to me, reminiscent of some of those powder-y deodorants I’ve used) but I may try them again later on. Maybe it was because I was testing out all of them that the scents fused into one another.

The following songs are ‘my jams’ (fai...
Salt-n-Pepa is still awesome!
No Doubt in Concert in Toronto – June 16, 20...
Britney Spears’ Circus Tour
Share this!