HomeReviews books Review and Pictures: Samantha Bee’s I Know I Am, But What Are You? 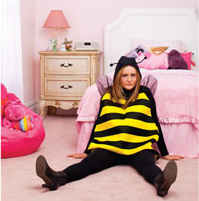 The Daily Show’s Samantha Bee has a new book out, a kind memoir of her childhood memories of growing up in Toronto. I’ll be updating this post as soon as I’ve finished reading the book and have coherently written out my thoughts of it (so far, it’s been an entertaining read with many literal “laugh out loud” moments) but for now, I’ll post my meet and greet story as well as some pictures taken from her book signing in Toronto on June 10th.

On her book tour for I Know I Am, But What Are You?, Samantha stopped by in Toronto, visiting a Chapters-Indigo to do a reading and book signing. This is not to say it was entirely surprising, considering that this was her hometown and she does come here quite often (for example, for Coopers’ Camera at The Toronto International Film Festival and her appearance on CBC’s Test the Nation). But I was giddy! Let’s not forget, at the TIFF screening of Coopers’ Camera I had enthusiastically (a.k.a. desperately) tried to meet one of my favourite comedic couples – the other being Amy Poehler and Will Arnett – and had failed miserably in doing so. Alas, I’d at least get to meet one half of the Samantha Bee/Jason Jones duo so yes, I was rather excited.

Getting there at around 5:45 pm, the store was still setting up the stage and seating area so I had some time to wander around before the 7 pm start time. At about 6:15 pm, I noticed the seats were all set up and so I grabbed the seat in the aisle right in the front row – along with another lady who was just there to listen to the reading. 7 pm rolls around and Samanth Bee, looking VERY pregnant, came on stage. First, she started off with some jokes about the ~inappropriateness~ of what she was about to read and secondly, to thank us for showing up (evidently, Leafs great, Wendel Clark, who also had a book signing that night at the Eaton Centre, had a smaller crowd show up for him and she joked about this being the sole reason for her to show up). She started reading a chapter from her book, the one about a family road trip and “carpet munching”. It was loads of laughs. Then at the end, she opened it up for audience questions. People asked, obviously, about her time on The Daily Show and how one can become a correspondent on it like her or a writer on it. She said to just apply, submit a tape, and they are always looking for new people, people who are a good fit for the show. She told us that that is exactly what she did, though they had come up to Toronto for auditions and she had gotten it (however, she suspected that she got it because she looked “news-y” or something to that extent).

When it came time to start signing books, I was basically right at the front of the stage so I was one of the first few people who got to go up. I had my copy of I Know I Am, But What Are You? (which, FYI, I had bought earlier in the day at FULL COVER PRICE! Egads, I never buy at full cover price, always taking the online route, but well, I needed it for the signing and online delivery wasn’t fast enough so I forked over the $30 + tax) and America (The Book). She said that her mother in law or aunt or somebody had the same name as me, I told her how much of a fan I was of her and Jason and that I went to see Coopers’ Camera at TIFF few years back, as I showed her my ticket stub (HA! Proof!) and a promotional postcard. She seemed genuinely happy to hear me mention the film and that I really enjoyed it. Because I was pretty much one of the first few people to go to the table, and no one ahead of me had asked for a photo with her, I was a bit nervous to ask – you know how some celebrities just don’t “do” photos at these things and asking could result in embarrassing rejection. I took a shot anyway and began with, “uhhh, would it be a huge bother if…” to which she interrupted with “no bother at all!” I probably could’ve then swayed from my original question of a photo and just asked for something completely out there, but I didn’t and I got a photo with her. Unfortunately though, the lady who had taken the photo for me had left it super zoomed (my fault, really) and it turned out kind of bad. Okay, quite bad. So for the sake of my ego and your eyes, I won’t post it here 🙂