HomeMusingsThe following songs are ‘my jams’ (fair warning, I will start dancing when I hear them) 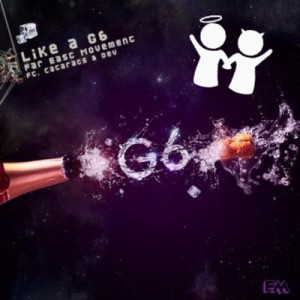 I just wanted to write a random blog and nothing more random than what songs I currently consider MY JAM which, when played in a bar or club setting, watch out for my drink spilling on you because I AM GONNA BUST A MOVE (or something).

But probably mainly just spill my drink because I can’t dance. Enthusiasm counts for something.

Far East Movement feat. the Cataracs – Like a G6

If I had a soundtrack to my life, which I really wish I did, this song would be played in every single life moment where I need to get pumped up (for a lack of a better term). And yeah, the song is about popping bottles in the ice… like a blizzard… and sober girls acting drunk, but I can’t help but feel a bit better when I hear it.

Sure, this song is OVERPLAYED to the max and there are a bajillion lip dubs/parody videos on the net made to this song, but it is like ear crack. The lyrics suck and I’m not even sure how sensical the song is but I can’t stop listening to it.

I especially like playing this song at the gym, but substituting the word “club” for “gym” and it totally pumps me up.

The original might not be the best song to dance to (I still love Foster the People)  but this remix is one of the best. Ever.

As the song starts with the piano chords, you’re like “meh” but when the beat picks up, you gotta bust a move! Plus, I heard it so many times when I was in Thailand that I can’t help but associate it with good times.

Similar to Feel so Close, this has a similar effect and similar nostalgia.

On my recent Italy/Greece trip, this was our tour song. I like it mostly because of that but also the catchiness and the accordion. Really, who would’ve thought that adding an accordion to the mix would make a song so much better? Plus there’s a dance that goes along with the song and it’s like the macarena, pretty easy to pick up.

Continuing on in the “songs I don’t understand because they are in Portuguese and have an accordion” is this song.  I don’t know how to sing along, nor would I attempt to (I can KIND of sing along to Ai Se Eu Te Pego, definitely not this) and the chorus sounds like it’s just a weird stutter, but it’s still freakin’ catchy.

Next in my “I have no idea what the lyrics are but I like this” song list is Mr. Simple from humongous Korean boyband, Super Junior. The only part I can sing along to is when they say ALL RIGHT, BLOW YOUR MIND and the occasional parts when they repeat “simple” a couple times. The rest of the time I just make random sound effects.

Same category of “I have no idea what the lyrics mean” and in this case, the music video is a giant WTF but regardless of that, is this catchy or what? If you don’t think this is catchy, I question your entire life.