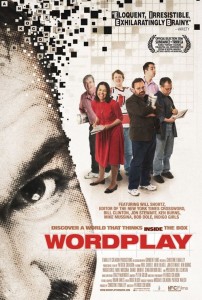 There’s Al Sanders, a project manager at HP and father of three, who has been in the finals many times before in the past but always seems to come in third place. There’s Ellen “RRRRRRRipstein”, the former “Susan Lucci of crosswords” but eventually became the 2001 tournament winner in a come-from-behind, last second victory. Jon Delfin, another one of the film’s featured competitors, is a piano player and has been competing since 1985. The year after that, he made it all the way into the final and has been there ever since. And Trip Payne is yet another fixture in the crossword puzzle tournament scene. He states that for a year and a half, when he was in New York, his life was nothing but puzzles — working on puzzles all day at work and more puzzle work on the side at home — so he later moved to Fort Lauderdale, FL to get out of the “puzzle scene”. Lastly, there’s Tyler Hinman, a college student who, if he wins the tournament, will be the youngest champion in the history of the event. Each competitor is interviewed about their love for crosswords/puzzles and we, as the audience, get a glimpse into their lives prior to the big event.

The film also delves into the history of the renowned New York Times puzzle, which increments in difficulty throughout the week with the Sunday crossword being the hardest. We get to see how a crossword is properly constructed, the rules of crossword construction (did you know that 1/6 of the diagram can be black squares? And symmetry is very important so that if you turn a puzzle upside down, the arrangement of black squares should stay the same? And you can’t use bodily functions as word choices), and “how wordplay” comes into use, for example.

With the intertwining of information about crossword puzzles and the “story arc” about who will become the tournament’s champion, Wordplay makes for an engaging and insightful film. You will end up learning quite a bit about crosswords that you likely never knew or gave a second thought to previously and you will become captivated by the competitors featured. Will Al finally break his spell of always coming in third place? Will Tyler Hinman make history as the youngest winner in the tournament’s history? Or will “RRRRRRRRRRipstein” do another come-from-behind victory to secure another win?

This probably isn’t a film for everyone. As somewhat of a crossword junkie (or at least, when I commute), I can appreciate it for its subject matter. However, folks who have no interest whatsoever in puzzles will likely find this film a bit of a snooze or not find its appeal. It’s definitely for a select and targeted audience.

Oh, and an amusing factoid for fellow Homestarrunner fans: Tyler wears a TROGDOR THE BURNINATOR t-shirt during the tournament.