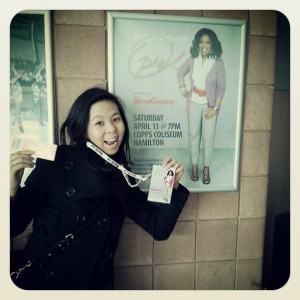 It all started after hearing on Twitter (gosh, how I love thee) on the Breakfast Television feed that they were doing a contest to win VIP tickets to see Oprah at her An Evening with Oprah event in Hamilton, Ontario. At least two people had been nice enough to send me a heads up on the contest, knowing what a rabid Oprah fan I was, but little did they know that I was already “on it”. Specifics were vague but from what I gathered, to enter, you had to tweet a question you’d ask Ms. Winfrey with the hashtag #BTOprah. I never really win contests but why not give it a shot, I thought. So I tried to tweet at least one question every day, including many ridiculous ones like “who’s your favourite Muppet” and “what’s your favourite dog breed other than cocker spaniels“. My creative spurt had dissipated and it was getting to desperate times.

One day, I got an @ reply from a Breakfast Television producer. Oh god, I thought, I hope they don’t want to have a segment on TV for Oprah fans to fight it out for the VIP tickets. If there’s one thing I hate, it’s seeing myself on TV. Cringeworthy to the max.  That wasn’t it, luckily, I had just won the contest! HELL YA! I was going to get to go to the event and meet her at a little VIP soiree prior to it, getting a picture with her as a keepsake.

I didn’t really tell anyone after I heard the news because I was still pessimistic and expecting to have this dream yanked away from me. Shit happens and they could be like, “your ridiculous questions about Muppets has disqualified you from winning” for all I know.

Fast-forward to the day of the event – April 13th

My friend and I drove to Hamilton and checked in at our hotel. Since the event was happening at night, it was nice that we didn’t have to worry about late night driving afterwards.

At Copps Coliseum, we waited with other people, mostly women who were dressed in fancy outfits (some even in cocktail dresses), who were also participating in the VIP meet and greet. The check in process required confirming your identity with photo ID and passing through security, I’m surprised there wasn’t also a pat down! As we were brought inside, I kept exclaiming, I CAN’T BELIEVE THIS IS HAPPENING! I CAN’T BELIEVE THIS IS HAPPENING! Good lord, it was happening.

We were brought into a cornered off area in the arena where we had open bar, hors d’oeuvres, and a pastry table. These are things I love: open bar and pastries. However, because the washroom situation was an unknown and I didn’t want to end up meeting Oprah with powdered sugar all over my face and clothes, I opted out of over-indulging in either. It was very difficult.

After chatting with some people, and after what felt like forever, we started lining up and the anticipation for her arrival was palpable.

She finally came in and gave a little speech about how she was going to take a picture with everyone in the room and not to tell her your life story.

My turn came fairly quick since I was lined up midway in the line and I had planned in my head to say something really inspirational, or really witty, or just showed that I didn’t accidentally drift into this VIP event as a non-fan. I wanted to show her how she’s really inspired me and that I’m basically like Liz Lemon with my Oprah obsession. Unfortunately, when I got up, all I could think was not to waste her time and just said something to the extent of “OMG OPRAH!” or something equally idiotic. I was just looking at her standing inches away from me, and in shock that she was indeed inches away from me. I felt a strange feeling in my hand as I was wanting to reach up and touch her face to see if she was real. It was odd and luckily, I suppressed that urge.

There’s also a funny story to go with my meeting with THE OPRAH: she puts her arm around my waist for the photo and the photographer took the photo. Then after the shot, Oprah pulls me in at the waist and she says in a stern voice, “stand up straight”. I was yelled at like a schoolmarm by Oprah. She was saying it like my mother says to me all the time. I was pretty sure my second picture attempt with her would turn out with me with this look on my face D:

But it turned out alright! 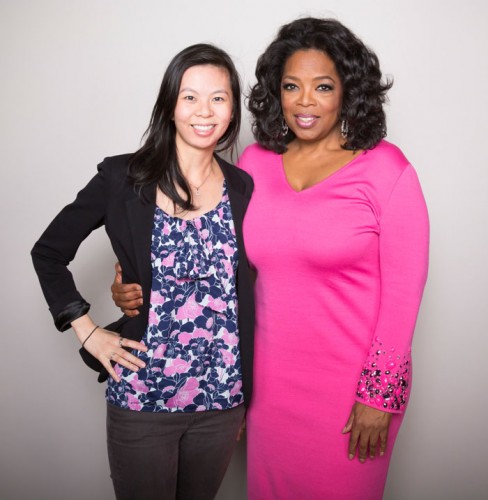 We accidentally ended up matching.

An Evening with Oprah

Oprah can talk. She spoke for maybe 1.5 hours without taking a sip of water. Then she did a sit-down interview with George Stroumboulopoulos for about half an hour.

What she spoke of covered everything from her tumultuous childhood to her rise to becoming one of the most well-known media personalities in the world to inspirational nuggets of wisdom that she’s learned along the way. There were many “a-ha” moments, as she calls them.

Shift your paradigm to service

One interesting point she was driving home is that one’s life should be bigger than one’s self. She said, “whatever your job is, shift the paradigm to service”. That really struck a chord with me because in my career and in my life, I feel like I should be doing something that matters. I enjoy the industry I work in and constantly want to learn more about this field, but am I doing something that truly will shape the world for the better? Not quite. And I often wish I had that feeling (while still being able to afford things and have proper sanitation).

Another theme she spoke of was about how at the crux of what all humans want is acknowledgement: do you hear me? Do you see me? Does what I say matter? And it’s true, nothing is more frustrating than feeling ignored, unappreciated, unacknowledged. I think that then leads to disgruntlement or apathy, both of which are not good qualities. Trust me, I know.

Go with your gut

Last aspect of what she spoke of that resonated with me was the importance of trusting yourself/your gut.

She said that we should only do what we intend to do because intention → cause → effect. If you want to say no, say no – if you say yes while really wanting to say no, it leads to an outcome reflective of that. Not only that, but your gut or in the back of your head, you’ll often hear a whisper. A whisper that says “hmm, that’s odd” and that whisper will keep nudging at you until you get the message. So listen to that voice.

You are still here, you are co-creating your life 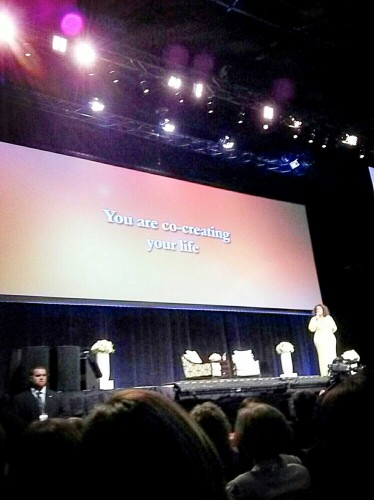 The truth is: you are still here.

It’s the realization that we still have volition and a life that is for us to determine. SO DO SOMETHING WITH IT! Preach, sista!

Later, when we got back to the hotel, there was a mob in the lobby. Turns out Oprah was staying in the same hotel as us and I ended up seeing her walk past me, as I was in the scuffle with 500 older ladies shoving me to get closer.

I want to try taking into account the Oprah wisdom. I’m inspired yes, but some of these things are good reminders and some really require some commitment. The stuff like dedicating my life more to service, I want to do. I just need to commit to it.

Photos from the day

Costa Rica Quest (with G Adventures) – PURA ...
A retrospect of 2015
How to make the right career choices for yourself
Before I Die…
Share this!